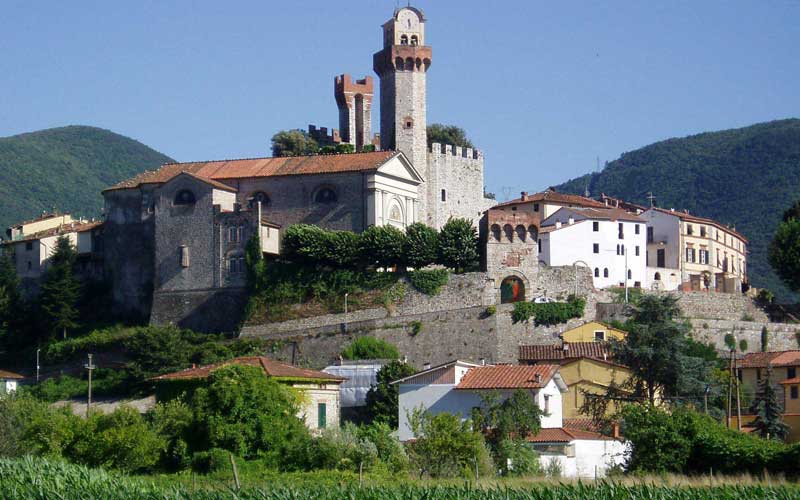 Nozzano Castello is a small charming village perched on a huge isolated rock with almost vertical faces at a bight of the river Serchio. It is in the Plain of Lucca, not far from the imposing renaissance walls of the town.

From here we have a magnificent panorama of the cultivated countryside and its surrounding hills; we can also clearly discern other fortified places: Torre dell’ Aquila, the castle of Castiglione, that of Ripafratta and the sites of Cotone and Castel Passerino. The rocca of Nozzano Castello has been recently well restored and now crowns this pleasant village and its many medieval corners with its bold and warlike presence. The ‘cassero’ has been recently restored. The walls are not in so good condition but can still be perfectly appreciated.

Nozzano Castello became part of the defensive system of the Republic of Lucca in 1126 and was one of its most important castles. Its position allowed the Government of Lucca to control the whole road network of the Monti Pisani. Its construction made it one of Lucca Commune’s most modern castles before the introduction of firearms.
The castle was often involved in the exhausting feuds between Lucca and Pisa and was completely destroyed more than once. It was renovated by the commune of Lucca in 1395, following a general plan to modernise all fortifications on its borders until the end of the XIVth century: this is how the castle appears to us today.