Trekking from Lucca to Pisa along the ancient aqueducts

A trekking from Lucca Cathedral to Pisa Cathedral, through the Monte Pisano, following at slow pace the Nottolini aqueduct and the Medici aqueduct which for centuries have supplied water to the towns placed on either side of the mountain.

Scheduled dates and on request. We will start our trek from the monumental fountain of Piazza Antelminelli, close to the Cathedral and not far from the railway station. Our path will follow the Nottolini aqueduct leading to the collecting water structures, an area named Le Parole d'oro (the golden letters). We will then walk through the Rio San Quirico valley up to the panoramic view point of Gallonzora, from which the view sweeps over the plain of Lucca, the Apuan Alps and the Apennines, and finally descend to Vorno, an ancient town at the foot of Monte Pisano distinguished by numerous master villas surrounded by "chiuse". A “chiusa” is an area limited by stone walls which encloses the villa and all its complementary elements: gardens, vegetable gardens, orchards, lemon house, stables and cellars. In Vorno we will dine and spend the night in a comfortable and friendly inn.
2

The next day, enlivened by the sound of waterfalls and rapids, we will climb the Rio Vorno valley, walking through humid and chestnut woods. We will thus arrive at Campo di Croce pass, towards which numerous paths converge. Once on the Pisa side of Monte Pisano, warmer and sunny, the vegetation that we will meet is mainly made of holm oak. At Foce Pennecchio, however, we will cross a beautiful chestnut grove. From here the path will become steeper and in a short time we will come across the first “bottinello” (water collector tank) of the Medici aqueduct named Scarpa d'Orlando. The term “bottini,” (literally, “barrel,” because of its vaulted shape)  refers to man-made underground conduits used to collect or to carry water to fountains. Following the underground pipes of the aqueduct we will cross the fascinating Valle delle Fonti, where we will find two botanical rarities from ancient times: a liane (Periploca graeca) and a fern (Osmunda regalis). After crossing the imposing Cisternone, we will find ourselves in Asciano,where we will have a light lunch cooked for us the night before by the innkeeper of Rio di Vorno. We will resume our journey along the 900 arches of the aqueduct until its end, in Piazza delle Gondole in Pisa. With a last effort, which will be well repaid, we will cross the city along the same path made by water to feed the city fountains, and end our trek in front of the wonders of Piazza del Duomo. 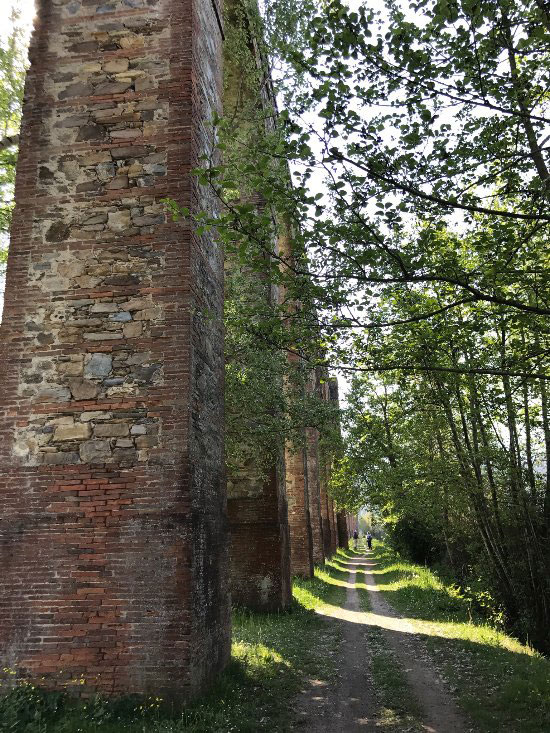 Dear customer, we inform you that from 6 August 2021 in order to participate in some activities, the Green Pass/Digital COVID Certificate will be required.

We remind you that the supplier will not be able to admit customers without Dogital Covid Certificate.